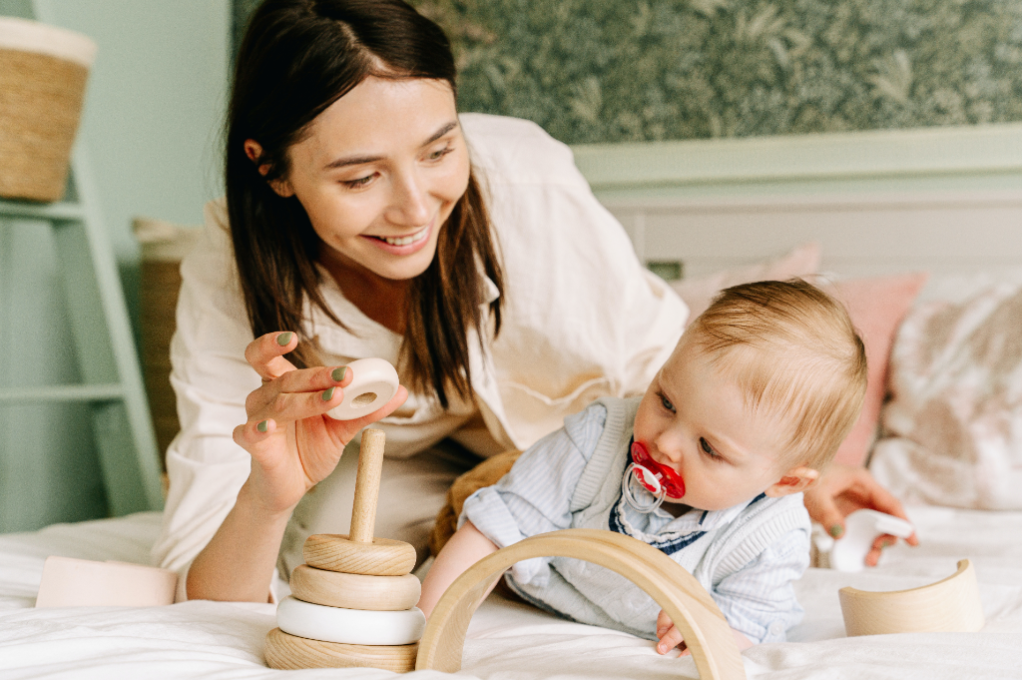 By the eighth month, the baby's mother and/or the faces of the people who regularly take care of the baby act as a mirror for the baby. The baby then gains the ability to perceive and react to strangers with certainty. When a one-to-one relationship is established, the first 'play' begins. For example, let’s consider 'peek-a-boo', described as the DA game by Sigmund Freud. With the increasing number of caregivers at the age of 2 and the baby’s social acceptance of them into the communication network, new plays also emerge instead of this simple baby game, peek-a-boo. Almost all of these plays are body themed. The mother is the most important partner in these plays. This change should be perceived as a sign that the baby has begun to develop social characteristics. Now other people also take place in the baby’s relationship with the mother; however, the mother always has more value and weight in the relationship.

Children up to the age of 2 play 'Play' games within the scope of this definition, especially games in which only one person, the caregiver and/or the mother participates. The initiator of the play is often the adult, with songs and movements, with the toys sometimes included or not (at such times, body parts become play elements as well). Play time is usually limited to a few minutes. The play ends when the child stops participating. What the adult starts, the child ends. The child cannot conduct the play by him or herself, it is necessary for the adult to continue to play. The desire to play and have a pleasant time is not initiated by the child. The request comes from the adult. The adult is not only willing to play but is also inviting and provocative. Re-play is common in the game. The game can start and end anytime, anywhere.

In this period, when a skill is developed and there is no winning or losing, the only purpose of play time is to have a good time. It helps to strengthen the relationship between the child and the adult as they get pleasure. These games, which contain cultural features, vary from house to house. Any play in this context is useful for relationship-building.

The most frequently played game is Peek-a-boo. It has a social feature. It helps to carry the tension created by the disappearance of the mother. Plush objects (Teddy bear, blanket etc.) which are called transitional objects, that are being dragged everywhere, appear. However, the relationship with these types of objects is not play. Even if playing alone with those objects is considered harmless by the mother, playing alone is not healthy for the child.

Playing in this age group is a means of having a good time. It makes the relationship healthier and more fulfilling. A child without play can mean an unrelated child. Unrelatedness is an unhealthy state. For this reason, it would be right to evaluate every opportunity as play time.

Playing, which is the most important job of the child during the pre-school period, will never disappear even though it decreases after starting school. With the advancement of age, 'Play' will diversify and become a part of social communication. 'Play' turns into 'Game'. Games now have rules and conditions. This time, the mother's place as a playmate begins to be replaced by peers from the social circle. As children begin to imitate the processes they observe in the adult world, this time in games, toys begin to appear as tools. On the other hand, there are games in which sometimes the body, sometimes talent, and sometimes intelligence is exhibited. All sports activities should be considered in this context.

Especially in the last twenty years, virtual game environments, which I think are very harmful to be considered as games, have become a favorite pastime of children and teens. Most of the time, they spend a very long time with computers, tablets and phones. Dealing with the unreal distracts children from reality. Especially in preschool children, it is often not possible to predict what kind of negativities virtual games leave behind. The time spent playing virtual games with the phone, the tablet, and especially the television, should be spent with parents as much as possible. With this application, precautions are taken against possible negative effects of children's development especially around primary school age.